The Craft of Directing

Creating the Space for Acting

Young Directors are full of ideas, concepts, imagination, energy … but there is one problem: how to transform it into a stage language, how to communicate with actors, how to elicit the actors creativity, how to organise one’s own artistic energy?

Jurij Alschitz, who has staged a multitude of performances all over the world, will reveal the secrets of his experience as well as the innovative tools for the new dramaturgical formats of 21st century theatre. He has choses three most important subjects for directors:

The performance as a space of events

We may have to repeat what we mean by a classical event, but we all know that the understanding of “event” has changed. Above all, the way we deal with it has changed.
Today we speak of the sphere of events, or of pixels of a performance … or of the non-event as the principle of artistic narrative … or of a performance as an explosion of images …
We are thus approaching so-called quantum cognition, which leads us to non-linear thinking. This cultural phenomenon is already anchored in young art production. How does one deal with it professionally? What does this mean for the art of directing?

Text analysis is a cold word and yet it is the source of energy par excellence. What keys do we have at our disposal? Concepts have conquered the stage. Exciting as they may be, from the point of view of acting energy, they have quite a short life span. So how can we generate the vitality of the ideas that exist behind them so that they become the driving force of the play?

The mastery of conducting rehearsals

Are there rules for the relationship between actors and directors? Which ones lead to trustful creative work? How can the process be organised? What rehearsal methods do I have at my disposal? It is precisely because rehearsals in theatre and especially in independent companies are conducted in a non-hierarchical way that the question of the artistic sovereignty of the director arises in a very special way. It is the art of setting tasks, of mobilising the actor’s imagination, of forming an ensemble for a common artistic vision.

3 days |  with 3 hours each
If you cannot attend one of the sessions, you can watch it online until the next one.
The whole course is divided in three parts, which can also be attended separately.

Course in progress. You can still join for topic N°2 and N°3. In this case you may receive access to the recording of N°1, please contact us for conditions. 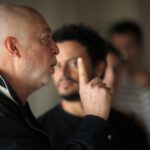