Rehearsal Methods - a course for Directors, Teachers and Actors

The most important task and challenge for the director is not the conception of a production, but its realisation with the actors on stage. The actor is the most important, but also the most complex, the most unpredictable material that the director encounters and has to deal with in the process of working on a play. In the directing departments of drama schools, this question is often not given enough attention.

The true art of directing reveals itself in the ability to work with actors.

After the successful Mastery of Professional Directing course, in which this topic was only touched upon but met with particularly strong interest, Jurij Alschitz offers now an in-depth course on different methods of how a director can rehearse with actors and which different ways are effective. Although this course is primarily aimed at directors, it is extremely useful for acting/directing teachers, theatre pedagogues and educators as well as actors and performers who are in many ways directors of their own roles and should know these working methods.

“All rehearsal methods can be compared to keys with which you can, so to speak, “open” the actor, the role and the play. They, like all keys, are somewhat similar, but nevertheless differ in a small “prong” and therefore open different locks. There is no one universal key that fits for Shakespeare and for Chekhov, for comedy and for tragedy, for every actor and for every theatre. There is only one exception – that is, the lockpick or the axe. But I don’t advise anyone to use break-in methods.

Every director/actor should master more than one method of rehearsal. What works well for one writer or actor is a waste of time for another. Therefore, a director needs to have several methods in reserve for a good production, just as the actor needs to have several methods in reserve for his role creation. Each method requires time and practice to learn so that it can be used creatively in rehearsals. In this course, I would like to present in detail five methods for working with actors – five keys for accessing a play or a role.

The first method is called “table-stage-table”. It is my variant of the well-known method of K.S. Stanislavsky and Maria Knebel – the effective method of analysis through action. Everyone who tries this method in practice understands that it is not a dogma, but a result of living research, and therefore requires own experience and understanding from everyone who wants to use it. I call my variant “table-stage-table,” first of all, to emphasise the “pendulum character” of the process of becoming acquainted with the role and the play.

The second method I call “Method of Constellation”, which emerged from my practical role work with actors. It is complementary to a method that I call the “light touch method”, a way of working in which the creativity of the actors is released through very sparse impulses and the material is opened up in all possible directions and allowed to fragment. The “constellation method” includes both the fragmentation of the role and the play as well as their new connections in the most diverse constellations through a series of tasks and exercises. It is a playful way of working with actors that literally reaches out into space – in acting and thinking.

The third method is called “storytelling”. Telling a story is one of our oldest cultural practices that had been somewhat forgotten. Today, people everywhere talk about narratives and have discovered their role in cognitive processes. I used initially it in the process of developing roles, but then I realised that it is also very useful for directors in developing scenes as well as a whole performance and transformed it into a rehearsal method.

No. 4 – the “Big Bang-Method”. Behind this very promising way of working with actors is the idea of the Big Bang theory, from which our civilisation, our galaxy and the whole universe emerged. So I thought I could take this cosmological method and use it to create a performance or a role. Another name for this approach is “Method of Explosion” because we are specifically dealing with the accumulation and release of artistic energy.

Finally, I would like to draw your attention to the fifth, seemingly classic “Method of Improvisation”. Improvisation lives in the “fetters of freedom”, i.e. it benefits from the precise setting of tasks and from professional handling. Of course, the principles and elements of improvisation and free composition are in many ways present in the previous methods of work; but if you use improvisation as a separate key, you will discover that by posing certain questions, by determining the themes of improvisation, you can construct a performance.

The methods overlap each other and in many ways complement each other. Two days are allocated for each method in this course. However, as elements of one method are also present in the others, sometimes one day may be enough to explain one method while another needs more time to practise.

As a basis for all examples and practical tasks, let’s take the play “Three Sisters” by Anton Chekhov. Let’s work together on the same play, but with different keys – and we will see what happens. I’d be happy to meet you and work with you.”

10 teaching sessions | 3 hours each
2 sessions in a row form one thematic meeting
All courses are recorded and can be viewed by the participants. A missed date can therefore be made up.
Each thematic meeting can also be booked separately.

A Certificate will be issued by the World Theatre Training Institute AKT-ZENT | Research Centre of the International Theatre Institute.

Conditions: active participation with at least 50% attendance in the online sessions of each of the 5 topics (up to 50% can also be made up via recording if attendance is not possible). 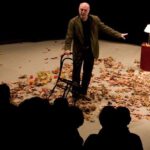